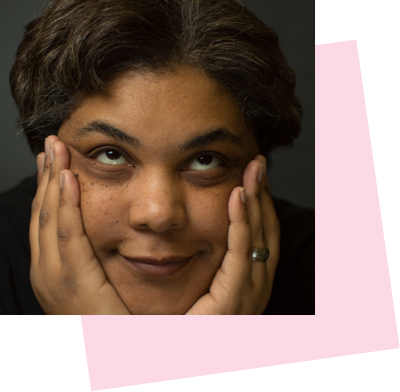 Roxane Gay’s writing appears in Best American Mystery Stories 2014, Best American Short Stories 2012, Best Sex Writing 2012, A Public Space, McSweeney’s, Tin House, Oxford American, American Short Fiction, Virginia Quarterly Review, and many others. She is a contributing opinion writer for the New York Times. She is the author of the books Ayiti, An Untamed State, the New York Times bestselling Bad Feminist, the nationally bestselling Difficult Women and the New York Times bestselling Hunger. She is also the author of World of Wakanda for Marvel. She has several books forthcoming and is also at work on television and film projects.

The Community Issue of Gay Magazine:

Excerpted from Strong Opposition: Carrying the Burden of Being Strong (Bitch, Winter 13, Issue 57)

The “strong black woman” archetype has persisted for so long it has taken on mythic proportions, and black women have long been paying the rice for shouldering it. No matter how well-intended its source, the phrase is not a compliment. It belies a set of assumptions and perpetuates a narrow-mindedness that prioritizes singular narratives over the complexities of human experience.

A “strong black woman” is imposing, intimidating, and oftentimes angry. She is selfless and independent. She is resourceful. She is stoic and suffers in silence. She gives and gives and gives until even the marrow has been sucked out of her bones. She is assigned an otherness when the “strong black woman” label is applied to her. She is different from everyone else. She is a woman apart.

Black women have often needed to be strong. During slavery, black women faced the constant threat of rape and separation from their partners and/or children. Keeping a family together was a nearly impossible feat, and they did what they could to simply survive.

In the wake of slavery, black women entered the domestic workplace where they had to deal with the same dangers they faced during slavery, while raising other people’s children in addition their own.

Where You can Find Her: